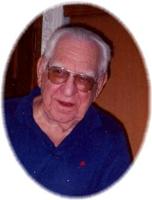 COOPER: A resident of Chatham, George Frederick Cooper passed away at the Chatham-Kent Health Alliance, Chatham on Friday, February 17, 2006 at the age of 89. Born in Ottawa, son of the late George and Agnes (Fripp) Cooper. Beloved husband of the late Elsie (Beech) Cooper (1999). Dear father of Rose Marie Marshall and her husband David of Bermuda. Brother of Gordon and Betty Cooper of London, and Violet and Tom Watton of London. George came to Chatham in 1939 and worked as a policeman. He also worked for Bert Stacey Motors and later Waekens Chrysler. He was later employed at the Court House. George was a member of Evangel Community Church, Chatham. He was a Past-Master and member of Parthenon Masonic Lodge #267 A.F. & A.M. and would have been a 60-year member this April. Family will receive friends at the McKinlay Funeral Home, 459 St. Clair St., Chatham on Tuesday from 2:00-4:30 p.m. & 7:00-9:00 p.m. A Masonic Lodge Service will be held at the Funeral Home on Tuesday at 7:00 p.m. Funeral Service will be held at the Funeral Home on Wednesday, February 22, 2006 at 1:30 p.m. with Rev. Bob Barwick of Evangel Community Church officiating. Interment in Maple Leaf Cemetery, Chatham. Donations to C.N.I.B. or charity of choice would be appreciated. McKinlay Funeral Home, 459 St. Clair St., Chatham, Ontario (519)351-2040.