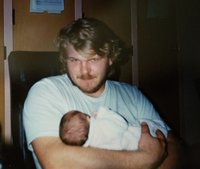 A resident of Ridgetown, Victor Zoldy passed away at the Chatham-Kent Health Alliance, Chatham Campus, on Sunday, April 26, 2020, at the age of 53. Born in Chatham, Victor was the son of the late Douglas and Jean (nee Jinkerson) Zoldy. Loving father to Zachary, Brandon and Victoria Zoldy (Scot) of Chatham-Kent. Grandfather to Ocean Meredith, who was born April 26, 2020. Brother to Rosalind (Travnicek) Zoldy, Marcia (Ure) Zoldy, Janie Zoldy and Frank Zoldy. Before Victor’s accident, he loved hunting. He was an amazing auto body repairman who use to participate in the tough man challenge they had across the Thames River years ago. He would also often find himself helping his father, Douglas Zoldy, with their Ranger. Cremation has taken place, with a Celebration of Victor's Life to be held at a later date. Donations made in memory of Victor to the Royal Canadian Legion Br. 243, Ridgetown, would be greatly appreciated. Online condolences may be left at www.mckinlayfuneralhome.com